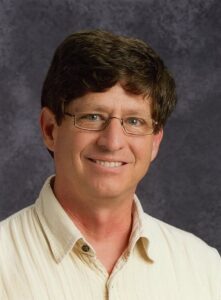 The Reverend Bob Lehman was born and lived in southcentral Kansas until graduating from College. In 1984, he completed his Bachelor of Science degree in Chemistry at Kansas State University, Manhattan, Kansas. Upon graduation, he attended the Lutheran Theological Seminary, Gettysburg, Pennsylvania.

In 1988, he completed his Master of Divinity degree and was called and ordained to the ministry of Word and Sacrament in the Evangelical Lutheran Church in America. He has previously served congregations in Frederick, Washington, and Calvert Counties.

From September to June, Pastor Lehman, also known as Mr. Lehman to his students, teaches Environmental Science and Advanced Placement Environmental Science at Bowie High School, Bowie, Maryland. In 2016, he completed his Master’s degree in Education from Concordia University, Portland, Oregon. He has begun a certificate in Climate Change Education through Goucher College, Baltimore.